Is it time to admit that dog-friendly offices are more exclusive than health-friendly? 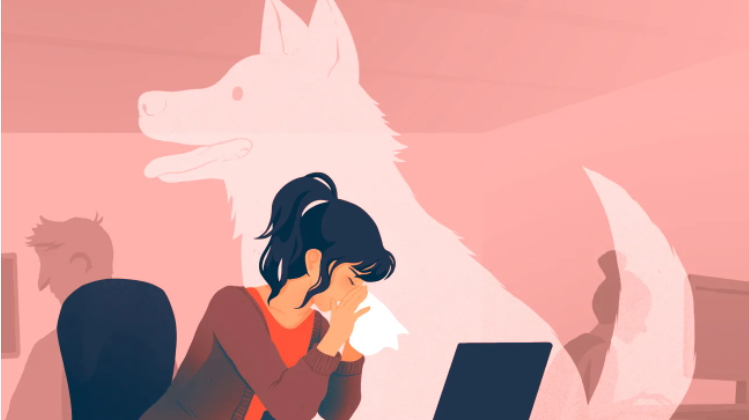 Names have been changed at request of interviewees.

It builds slowly. I start coughing — one of those annoying, tickly coughs that’s hard to listen to. My eyes itch, and the tip of my nose starts to twitch. Soon, my eyes are red and puffy, and my nose is streaming.

The cough gets louder and more barking. It becomes harder to swallow, and my chest feels like it’s in a vise. I can’t take a full breath in, and breathing out is even harder. It’s difficult to focus, and brain fog sets in. I feel like I have a virus and just want to lie down with a box of tissues in hand.

I should speak up. But it’s hard — these symptoms are tied to what’s considered an office perk: dogs at the workplace.

The times I’ve spoken up, some colleagues have been personally offended I’ve shunned their fur baby. People have said a few times that I should get therapy to resolve my “dog issue” and that maybe I’m not allergic at all, just think I am. This makes it challenging to fight against the rising tide of dog-friendly office spaces when so many people love having their pets at work. But the presence of a pooch in the office can make people physically sick.

“People
loved having a dog in the office, so I felt bad, almost ashamed, when I’d have
an [allergy] attack.” — Jessica, who left a job due to her pet allergy

According to a 2011 allergy report by Quest Diagnostics, people with allergies need to take 1.7 more days off work than their peers without allergies, resulting in almost 4 million missed workdays in the United States every year and over $700 million in lost productivity.

Jessica tried to stick it out at her dog-friendly office at a digital marketing company. “My boss was really sympathetic towards people with pet allergies and did try to keep her dog in her office, but it always escaped and inevitably would end up at my desk,” she says.

“People loved having a dog in the office, so I felt bad, almost ashamed, when I’d have an [allergy] attack. People don’t always have the patience for allergy sufferers, so it makes it difficult. I often felt sick but didn’t want to say it was probably the dog that was the problem, as I knew my boss would be terribly upset,” she says.

Jessica left her position after six months, largely due to the presence of the dog.

There’s no such thing as a hypoallergenic dog.

It’s not something that can be fixed by simply removing the animal once they’ve been in the office for a period of time. Nor does it make any difference if you’ve been told your pet is hypoallergenic.

There’s no such thing.

According to the Asthma and Allergy Foundation of America, it’s a protein in the pet’s dander (dead skin flakes), saliva, and urine that causes a reaction. And it doesn’t matter what length the animal’s hair is or how much it sheds. These allergens can stay airborne for months and cling to walls, carpets, furniture, clothing, and other surfaces long after the animal is gone.

When Maria recently started working for a small publishing company, she wasn’t aware that the husband-and-wife owners would bring their dog to work twice a week. Even though she’s highly allergic to dogs, she didn’t say anything at first because she hoped that she could mitigate the allergies by not petting or interacting with the dog.

After a few weeks at the new job, however, her asthma began to worsen, and she needed to start using an inhaler. She also developed a sinus and ear infection.

“I finally brought a high-end air filter into work and told the owners that I was allergic to the dog. I think they took it personally at first,” she says. “It would have been easier if it had been a larger workspace with a human resources person, so I didn’t have to feel like I was confronting the dog owners themselves. But, after a few days, the boss suggested moving me from my open cubicle into a private, unused office.”

The situation was stressful for Maria, particularly being in a small office. She developed an ulcer from the worry. “I didn’t want to make waves in the office or be labeled a dog hater, because I did like the dog. I just was allergic.”

The obvious answer for a healthy workplace is to not have pets. Allergies don’t exist without allergens.

In the United States, allergies are at least covered in the Americans with Disabilities Act. This is unlike where I live, in Australia. Without an act to cover it, allergies are left to HR departments or the whim of bosses.

And while antihistamines work for some people, they often come with side effects, like insomnia and restless legs syndrome. Alongside congestion, persistent coughing, and asthma, life can be hard when you have an allergy attack, because histamine levels are at their highest. This results in higher than normal stress levels, which is counterproductive for both employees and employers.

Allergies are only the tip of the iceberg when it comes to pets at work. There are many people who have experienced trauma with pets and are plain scared of animals. Are their fears and concerns less valid because someone wants to bring their pet to work?

It’s certainly not an easy dilemma to fix — but one that needs to be thoroughly explored if workplaces are to be truly healthy for employees.

This article was commissioned for Healthline >>>